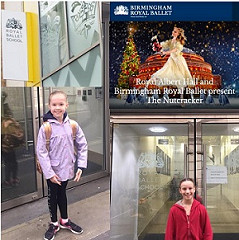 Congratulations to both DELILAH & MIMI who auditioned amongst 336 other children to take part in the Birmingham Royal Ballet production of The Nutcracker to be held at the Royal Albert Hall over the Christmas period - We are DELIGHTED to say that DELILAH has been cast to perform in the Nutcracker with BRB & that MIMI has been asked to be a reserve ... a fantastic achievement for both girls, with them having progressed through the first audition to the last 35! The final audition was held on Monday at The Royal Ballet Upper School in Covent Garden, and both girls were so excited to dance in these prestigious studios!

Congratulations to all our students who danced at Royston Festival ….cups were awarded to 🎉 Grace P - the Intermediate Ballet Cup AND the Intermediate Tap Cup …AND then the Adjudicator’s Cup as well!! (Grace pictured below) 🎉 Evie M - the Junior Ballet Cup! 🎉 Eilidh G - the Senior Contemporary Cup!